Jeff Lewis, my dad Paul Harty's cousin in the same generation, is also an avid family historian. He has many Lewis artifacts in his possession. When recently viewing this new webpage, he commented:

I like the web page a lot. I think you have one of the pictures identified wrong. The picture of the fellow on the banner that is identified as Andrew J Copper is really Eli Cooper Lewis, He was Joe Guilds younger brother. He was a First Corporal in Co. A., 8th Mo. cavalry along with Joe.
Good work,
Jeff Lewis

Thanks Jeff for the clarification. So that everyone now knows, there are two Lewis's in the banner. Of course, Joseph Guild Lewis, my 3rd great grandfather, as you may recall, and now Eli Cooper Lewis, Joseph's younger brother. You will notice Eli in the upper left-hand corner of the banner. Both men were in Co. B (later merged to Co. A) and both returned home to SE Missouri after their surrender in Shreveport, LA on 7 Jun 1865.

It is nice to see, that only after having this site up for a few weeks, there are clarifications made in family history that weren't known (at least to myself and my Dad) to some of the descendants of the Lewis family. This was one of the aims of the site. Thanks, Jeff, for fixing a sizable error on my part and setting history straight...I'm sure Eli and his descendants thank you for it at the least! 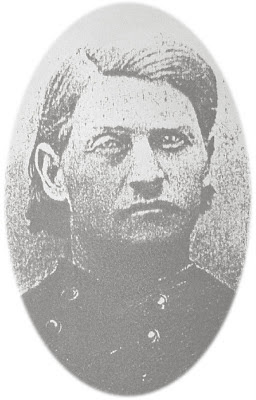 I am confused and am asking for clarification. Is this picture Andrew Jackson English or someone else? I am the greatgranddaughter of A.J. English and am looking for information regarding him.

As I said in the post, this picture is indeed of Eli Cooper Lewis, my 3rd Great grandfather, Joseph Guild Lewis's younger brother.

The picture was taken from James McGhee's book, Campaigning With Marmaduke, but he mistakenly had it listed as Andrew Jackson English.

I will say, that I am also related to Andrew Jackson English! My dad, Paul Harty, Jr, has great amounts of family history done and would love to correspond with you.

My email is csaharty@yahoo.com and my name is Brent Harty.

Look forward to hearing from you! bh