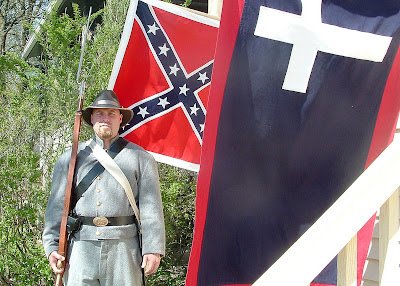 We need to wave the flags of our heritage proudly...even if you aren't a Civil War Reenactor! I also, of course, fly our 'Star Spangled Banner', our glorious and beautiful Stars and Stripes, on a daily basis. A lesson learned clearly from the Civil War was that men on both sides of the conflict were patriots...not fighting some attacking foe from foreign soil, but indeed repelling or supressing (whatever the perspective may have been!) other similar men - Americans - who were willing to make the ultimate sacrifice regarding their beliefs of government. Here is a great quote that sums up the idea nicely from General John Gordon, CSA. "...It will be a glorious day for our country when all the children within its borders shall learn that the four years of fratricidal war between the North and the South was waged by neither with criminal or unworthy intent, but by both to protect what they conceived to be threatened rights and imperiled liberty:

That the issues which divided the sections were born when the Republic was born, and were forever buried in a ocean of fraternal blood."

Brent, I really like that quote from General Gordon. Where did you locate it? Mike Gordon, a friend of ours is probably related to him, same name, similar look, except Mike has red hair, but he also is a good and wise man, as General Gordon appears to be.
Thanks!

I was honorably discharged from the U.S. Navy in 1971 and your mom, Lewis and I lived with Dad and my younger siblings until I got a job and a house. Flag Day approached, so I asked Dad if I could display the American Flag and a Confederate Flag from the front of his carport. He agreed, so I proudly displayed both flags! A neighbor who had joined the national guard to gain an education, but specifically to escape military service in Vietnam, came over and haughtily asked, "aren't you flying the wrong flag? He then pointed to the Confederate Flag. I wasn't sure if he was kidding or not, but since he came from a long line of Cape Girardeau Yankees, probably one that harrassed Joseph Guild Lewis, I sort of figured that he wasn't.

My dander was raised, blood pressure shot up and flight or fight feelings, mainly fight, were sounding bells all over the place.
I calmly told him, I think, that I had just served four years in the U.S. Navy to protect my right to believe, feel, say or honor traditions that were unique to me. I went on to say that the Confederate flag was red, white and blue, was carried by American born soldiers and was as American as "Old Glory". It deserved to be flown next to the American Flag, and I personally don't feel that anyone, especially draft dodgers and troublesome people, have the right to tell me otherwise! He blinked, dropped his head and left.
The flag stayed up! I flew it in every home that we lived in, except here in North Carolina. Out of respect, and because I am older, I don't press the point here. Yet, I can see it flying proudly in my mind and my heart will always honor it as my own. I am, as Mr.Randolph so proudly states in his poem, an Unreconstructed Rebel! Thanks for reminding me. Our American Flag was raised high and we ate some cake and ice cream for the "Bonnie Blue" and Confederate Flag. Better that way, I guess.

Dad...I enjoyed both of your comments. I like that story about the Yankee draft dodger. I'll have to put that in your personal history file that I keep!

As for the Gen. Gordon quote, ain't that great?! I found it on Shotgun's Civil War Home. It is on his quote page as his favorite. He thinks a lot like us.

you can also see this in the Civil War tab on this blog. This quote is important. Too bad you won't ever hear it in school. Unless of course one sits in on my civil war presentation. It is in there at the end!

Gen. John Gordon was from Georgia.

They should call use the term, Unreconstructed Patriot! It is much closer to the truth. There is no rebellion in standing up for the truth against tyranny!

Well, it's still a rebellion, but rebellion isn't always a bad thing. The Revolutionary War and the Rebellion's fight against Palpatine's evil Empire are two nice examples, hehe.

Yea, maybe so. I guess the crux of what I was trying to say was that rebellion is always a point of view. In America we call them 'Revolutionary War Heroes'. I'm sure in Britain, they have a much less flattering take on those same folks. Yankess, and all those brainwashed by such, call Confederates 'Rebels'.

Sooo, my point was that I refuse to bow to such revisionist bunk. All those men and those faithful to their cause to govern themselves, are clearly patriots to me!

Yeah, I know what you meant. I was just being a punk.

Reminds me of a line from Ben Franklin in 1776, "A rebellion is always legal in the first person, such as 'our rebellion.' It is only in the third person - 'their rebellion' - that it becomes illegal."