Well, there wasn't a whole bunch of fighting that occurred in these months, but there was some interesting action. Marmaduke's First Raid began by starting from Pocahantas, Arkansas, (which is in Northeast Arkansas) on New Year's Eve, 1862. He drove Northwest of that position to just east of Springfield to a town called Hartville, Missouri. His forces took a garrison there on the 9th of January, and then looked for more. Brigadier General Merrill, US, came out to put a stop on the action. Although his Yanks were pushed back to Marshfield, they dug in and inflicted a great deal of casualties (329 Confederate dead to 79 Union dead). But in the end, after over 4 hours of fighting, the Yanks under Merrill chose to retreat from the field, thereby handing General Marmaduke the victory. But, fearing to be cut off in enemy lines, he retreated back into Arkansas. Not a whole lot was accomplished by this action, really. It was designed to take the heat off the other Confederate forces in Arkansas, but it didn't affect this much at all.

Just a few days before this raid, the 8th Missouri was formed on Christmas Day, 1862 near Van Buren, Missouri in South-Central Missouri in the beautiful Ozarks. I bet it was a crisp, early winter day that 25th of December, but it surely was a bleak time for the good citizens of Missouri. They didn't even get a chance to enjoy Christmas with family that year! I'm sure the boys brought their own gear, horse and of course clothing. Families and sweethearts were left behind to defend them from the depredations of an invading host.

This Christmas 2007 will mark the 145th Anniversary of the formation of the 8th Missouri Cavalry Regiment. Of course, it is my aim to keep their memory bright and valor honored for many years to come. As long as the United States of America is still a Nation, it is critical that we remember how that came to be. Before the Civil War, we were not really united. After the deaths of 620,000 of America's best, and loss of billions in infrastructure and the ruination of countless families - we became a Nation. At the close of the 19th century, we were well on our way to becoming the greatest Nation that God ever established upon the face of the earth!

It appears that Marmaduke was rip roarin', ready to go to put the newly formed force in action, so as to atone for the loss at Elkhorn Tavern in March earlier that year. I bet they were hoping for a battle or two that would come out something like Oak Hills. I'm sure all the boys of the 8th MO were eager to defeat and expel them blue bellies from Missouri! But it never quite worked out like they all hoped for in the 8th, but they sure did all they could to bring it to pass. 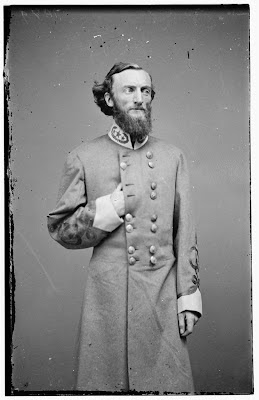 Within almost 3 years time, the 8th MO Cavalry Regiment would do its final action to free Missouri from Union control. Price's Raid into Missouri would be completely done by 2nd of December 1864, with the last large engagement ending in defeat at Mine Creek, MO.
Posted by CSA Brent at 4:09 PM

Hello I just entered before I have to leave to the airport, it's been very nice to meet you, if you want here is the site I told you about where I type some stuff and make good money (I work from home): here it is