I've been aiming to put a new post on for some time, but was searching for something appropriate. So I turned to Jim McGhee's book, Campaigning With Marmaduke, for inspiration. And lo and behold, something jumped right out at me!

On February 15, 1903 William Lafayette Jeffers passed away in Corpus Christie, Texas. He went there to try and recover from poor health. His remains are interred in Jackson, Missouri, which was his home just prior to the Civil War.

So just a few days ago, this was the 105th year of this date.

So in remembrance to this gallant Missourian, here are a few words from Jim's book from the words of a Jenkins of the Eighth MO.

"I am certain that there are few who knew Colonel Jeffers intimately but admired him. Ask one of his regiment and I doubt not but nine of ten would speak of him in the highest praise, both as a man and as a soldier. He was a disciplinarian, but mild and just. He was a great admirer of a true soldier, but had no use for the fraud, or one who shirked his duty. He sympathized with his men on long and tedious marches, and always took 'pot luck' with them. The ground was his bed, and his McClelland saddle his pillow. This was one reasons his soldiers loved him. His regiment was never known to desert him under the most trying of circumstances, and it went through a good many experiences when it took all of a fellow's pride to keep him from showing the enemy the bottom of his feet."

"The writer was acquainted with Colonel Jeffers before the war, and always admired him; and it was my pleasant duty to nominate him for captain of the company he organized at Jackson in '61. He being a veteran of the Mexican War and having seen service gave him a high standing with his men from the very first, and we confidently expected him to lead us on to victory or death, for none of us expected anything less, as we felt that each of us was a match for at least 4 Yankees. We drilled with great enthusiasm, but I shall never forget a remark he made to us one evening as we rested a few minutes. "Boys, this is nice, but when we get to stopping bullets it won't be so pleasant," and I remember yet the little cold chill that ran down my back. I felt it on many occasion afterwards."

(The company organized at the Cape Girardeau County courthouse in Jackson on March 7, 1861 was known as the 'Swamp Rangers'. It eventually became Company A, 2nd Cavalry Regiment, 1st Division, Missouri State Guard.)

"Captain Jeffers disbanded his company at New Madrid in the winter of '61-62 (December 27, 1861)" Most of the men remained in the area until the 8th MO Cavalry Regiment was mustered into service at Pocahontas, AR on December 12, 1862. "...and the old company lost its idol, for Captain Jeffers was elected colonel. While we rejoiced to see him promoted, yet we were loath to part with him as our captain. From this time on it was forward, retreat, scout, poor beef, parched meal coffee, with perhaps only a frying pan with which to cook bread and meat and then make meal coffee in. But with hearts of flint, with the black plume ever in front of us, no man talked or thought of showing the white flag. Jeffers never forgot his old company, but would often come to see how we were getting on, when we would sing:

"You may talk about your Annie-
but give me some honey,
Some biscuits so nicely buttered o'er,
Some hot smoking java-it makes my mouth lava,
I wish I had some in me now, don't you?

Come, come, come rain, come
Float to the top of my boots.
Come rain and thankee,
And drive back the Yankee,
Until our ranks are filled up with recruits."
"Yes, he was ever our true friend, and we marched and fought and went hungry - but always in front waved the black plume." "It was never 'Go on,' but 'Come on, boys.' Few men ever left a more devoted regiment of men to mourn his loss."

"He sleeps his last sleep,
He has fought his last battle.
No sound can awake him
to glory again." 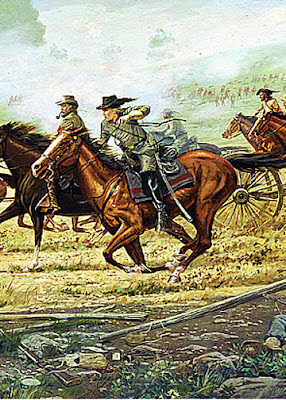 I'm glad you liked it, Sweetie Pie. I thought it was a fitting tribute for such a seemingly great, yet typically unknown & somewhat common, leader in the Confederacy. Or should I say, the new United States of America?

There were some good sound bites in there. Pretty cool.

I enjoyed the posting on Col. Jeffers. I know that Grandpap would have approved too. Jeffers was indeed a patriot in so many ways, yet forgotten by those that didn't know his true spirit. The quotes from Jim are indeed revealing, complimentary and inspiring. I congratulate him for such a good article and you for being touched by enough to the extent that you republished his article. Good job!

Thanks much Dad and Nathaniel. Yep, Jeffers seemed like a good friend to have. It is good that he is remembered, even these 105 years after his death...

Nice posting on Colonel Jeffer's Brent. I have some papers I'll email you showing James Whitledge being enlisted by Colonel Jeffer's in Cape Girardeau Co. I have his service papers through Dec. 1863. I still haven't located a picture of James yet but I do have one of his wife Ailsay Nations Whitledge.

Thanks for the comments and look forward to seeing some of the War papers of your Grandpa Whitledge who served in the 8th MO. Maybe some of it would be good to put on the site!

I am a descendant of James Whitledge that now lives in Arizona elocated from Virginia and Delaware. I would like to hear more about his service and others named Whitledge.

Cath email address is mankais@yahoo.com with many thanks!

Sorry for the typo