Well, as of April 21st, 145 years ago General John S. Marmaduke started his 2nd raid into Southeast Missouri. His aim was to take steps to help loosen the grip of the Yankees Invaders out of the home state of the men under his charge. I'm sure the men were rip roarin' willing to get underway and to exert protection over their families in Cape Girardeau, Bollinger, Scott and New Madrid Counties. Taking over Southeast Missouri (if other forces could have been brought up to keep it that is!) was sure to come about! 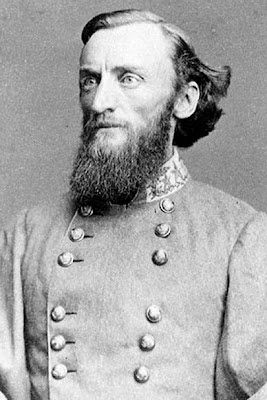 The raid started off pretty darn good. Marmaduke came up out of Arkansas and approached the Union garrison at Bloomfield, MO. They took the site seemingly without much of a fuss, as Union General McNeil retreated back to the much stronger fort at Cape Girardeau. I think at this point, the Yanks still weren't sure what Marmaduke's intentions of his 2nd Raid into his homeland were.

On Sunday, April 26th, the battle began. Prior to the fight on Saturday night, Gen. Marmaduke under a flag of truce, asked Gen. McNeil to surrender. Marmaduke had a signed paper from Gen. Price stating he had 60,000 men in the area. McNeil said, "We are not doing that kind of business now." (quite a deep and witty response...). So the fight was seemingly on. At 3 am Marmaduke asked him to surrender again, but Gen. McNeil said, "That he had no time to swap jack-knives, or exchange tin plates; that he was in for a fight." 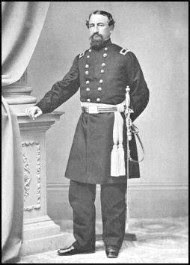 So at 10:30 am, the battle began. Marmaduke sent his first wave right down the middle (I think I would have preferred to flank, especially if I had the numbers on my side, but hey, he was the general, not me!). After 3 hours or so of fighting, Marmaduke pulled his force out and headed south. Apparently, the Yanks thought he might make another go of it, but it was not the case...he was headed back to Arkansas.

From the lopsided Union victory, I'm not sure what Gen. Marmaduke was thinking. It seems he had the numbers...the account said he 2,000 men engaged to McNeil's 300 engaged. But Marmaduke's command took a fair amount of casualties and seemingly Gen. McNeil's command took almost none. To be fair to Marmaduke, Cape Girardeau was well defended with 4 separate batteries. And McNeil was well prepared. But it almost seems that Marmaduke didn't plan the attack as well as he could have. Hard to say I guess. If I recall from other stories, (as well as the New York Times article) it appears that from the garrison at Pilot Knob there was a sizeable force under General Vandever on its way that forced Marmaduke from his original plan. It was a gallant plan...it just seemed to lack sufficient resources to make the plan stick. After all, it was a raid! Ah, the common story line of the War for the Confederacy and boys from Missouri!

Here are a few links for you.

Lt. Colonel Baumer of the 1st Nebraska Infantry's report of the battle
Battle of Cape Girardeau - April 26 - A thumbnail sketch of the attack
Battle of Chalk Bluff - May 1-2
Actual New York Times article a few days after the battle

Technically the raid ended with a win, but the win was getting back across the St. Francis river to keep from being wiped out by Yankees, so I don't figure any of the men of the Marmaduke's Brigade figured this engagement a win. So Marmaduke's 2nd Raid of Missouri started with much promise, but ended with the harsh reality of entrenched Federal opposition in Missouri. During the rest of 1863 and much of 1864 would find the armies in the Western Theater trying to keep from getting completely squeezed out of existence in Arkansas. It is amazing they held on as long as they did against long odds of every kind.

PS...that McNeil brute seems to be a pretty shady character. If there is any doubt to his character, he was with that idiot 'so called' General Nathaniel Lyons during the Camp Jackson Massacre. Also he was the man who carried out the order of executing 10 Confederate soldiers, known as the Palmyra Massacre. For his deeds there, McNeil has the nickname of the Butcher of Palmyra. He also was seemingly good friends with Lyons, and was handpicked by the former to take over his command. That should tell you all you need to know about this McNeil scoundrel!

Excellent account of Marmaduke's raid. When McNeil left Bloomfield for Cape, his army reportedly burned the county courthouse. That is enough for me not to like the brute much. To the victor belongs the spoils and the writing of war stories about their noble deeds. It is amazing how the brutality of the Union Army is seldom portrayed but the Confederates are painted with a bloody brush, witness the Andersonville Prison and never listed U.S. Johnson Island Prison which was cruel and evil and proportionately worse than Andersonville ever thought about being. Johnson Island had plenty of blankets, clothes, food, medical supplies and water but they let the prisoners die horrible deaths. Many confederates froze to death in the harsh winters while the Yanks bragged about killing more "rebs" than the Union soldiers killed in battle. Oh well, good job anyhow Brent. Keep up the good work! Dad

Well, I didn't know about that jerk burning the court house in Bloomfield, but I do recall you mentioning that it was burnt to me before.

Yea, you don't hear many stories of brutality about Confederates, now do ya?! And Johnson Island was one of the nice ones!

Thanks for the post...I enjoyed finding the info out.