Well, since I first made the site, I didn't have revolvers, or a McClellan saddle, or anything of the sort to place in the banner. I had to use what I had on hand. Now that I have that stuff, I've been wanting to re-do the banner for sometime to reflect the changes.

From left to right, there is:
As stated in several parts of the blog, Lt. Lewis is my 3rd Great Grandfather. And Cpl. Lewis is his youngest brother. And Col. Jeffers is related by marriage. In just the 8th MO Cav. Regt. alone, I have 26 total relatives (including Col. Jeffers by way of marriage). So maintaining the site is not just one of interest and preserving our National history, but one of honoring my ancestors as well.

I hope you like the new banner. Thanks go to my Sweetie Pie, my wife Bethany, for helping me get reacquainted with Photoshop so I could make it. 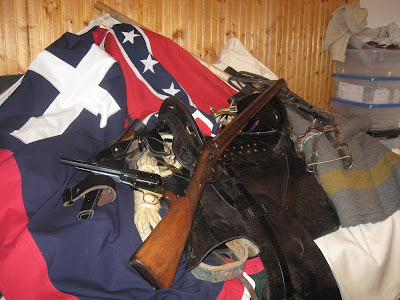 Here is the original pic. You may notice the Missouri Battle Flag and the Confederate Battle Flag. It is tough to see because the McClellan saddle is black (made in 1918 btw), but you will note a Remington New Army pistol, my holster with a my '51 Colt Sheriff in it, a rope used for the pickett line, my period double barrel 12 gauge shotgun. It is still a bit aways from live fire. Someday...

Above the shotgun you'll see my spurs, and then you'll see the borrowed bridle from my pal, Merle Collins, who has gotten me into the cavalry side of reenacting, and furnished much of what I needed to get started and continue to this day. And then there is gray wool blanket I use for the saddle blanket.

And here is the original banner so you can compare if you wish. I like the new one a lot. But the original was fine too!
Posted by CSA Brent at 1:59 PM

I like the new banner a whole lot better than the other one, which I thought was great, so I suppose this one must be the very best ever!

Thanks Dad...I like new one a great deal too. It came out well.