For quite some time, I thought it would be neat to try and find where my 3rd Great-Grandfather, Joseph G. Lewis, was paroled from the service of the Confederate States of America. My dad was told from his Grandpa Lewis that this occurred in Shreveport, LA. We are blessed enough to have a copy of the actual parole paper that my grandfather, LT Joseph G. Lewis signed. 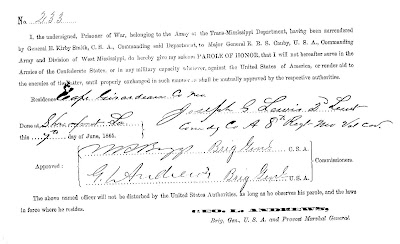 I think it is great that I have his signature on this very important document. In case you don't read the whole parole, the key part says, "do hereby give my solemn PAROLE OF HONOR, that I will not hereafter serve in the Armies of the Confederate States, or in any military capacity whatever, against the United States of America,"....

Well, on my way to Ft. Benning, GA in early April this year, I stayed the night in Shreveport. I went to pay for the night at the hotel, and in the lobby, there were pamphlets of places of local interest. Well, I saw one that had historical sites on it. I wondered if perhaps there was some sort of memorial to the Confederacy there in town. And lo and behold, there in the pamphlet, was a picture of a Confederate monument that was on the sight of the last Confederate flag being flown in town, and it was dated 26 May 1865. Needless to say, I felt it had to be the place where Joseph and the rest of the 8th MO Cavalry Regiment signed those parole papers and went back home a few days later.

So the next day, I excitedly rose and got ready to leave. I went to the site in downtown Shreveport. As one might surmise it was on the sight of the court house, which was used as General Kirby Smith's headquarters for much of the War. The old court house burnt down and a new one is built on the same location. But I lingered quite a while on the site of the monument. It is a beautiful monument. 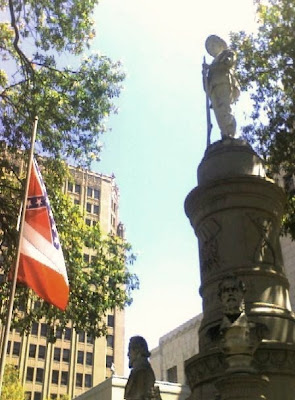 Here is the monument with a Confederate Soldier on the top, and Generals Lee and Jackson (repsectively) looking on. General P.G.T. Beauregard and Govenor Henry Allen round out the busts on the monument. 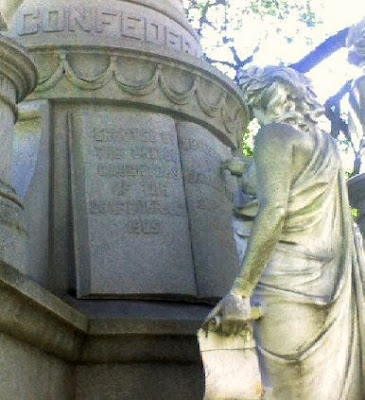 The local United Daughters of the Confederacy (as I recall) paid for the monument and had it erected in the early 1900's. I can't recall exactly when it was put up. From the picture it looks like 1905. But that figure of the young women is writing with her hand on the monument her gratitude to the men of the Confederacy for their sacrifices in search of liberty for their families back home during the War Between the States. 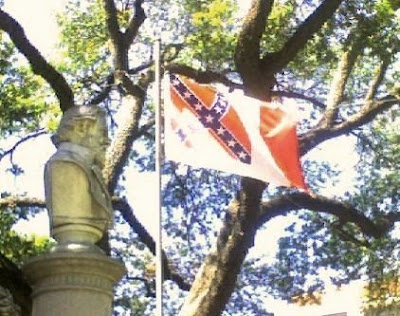 Here is a bust of General Robert E. Lee with the 3rd Confederate National Flag
waving in the background.
As you can see from the pics (sorry for the quality...all I had was the camera on my phone) it was a beautiful spring morning. Perfect in fact, for such a visit. As I stood there, I thought about those men who surrendered there during that time. I felt their presence there that day. I especially felt the presence of my Grandpa Lewis, and his brother Eli Lewis and other family relations and friends of theirs who served with them in the 8th Missouri Cavalry Regiment. It was a special time for me, and an honor to visit the monument that day and think on those men. I gave my dad a call and talked with him a bit and read the inscriptions to him. I knew he would have very much liked to have been there with me. And even though he couldn't be there personally that day with me, he got to share in the moment with me a bit.

My respect goes thankfully goes out to those men who finally on 7 June 1865 laid down their weapons of war after so much sacrifice and blood shed on behalf of their homes, friends and families back in Missouri for four long and dreadful years. Praise be to God for the men of the 8th Missouri Cavalry Regiment!!
Posted by CSA Brent at 6:43 PM