Due to my new assignment in the US Army (Executive Officer...a position normally held by experienced 1st Lieutenant, not a brand new 2LT!...rough sledding here at first) I've been too busy to put up a post. I've been wanting to, but I'm a bit behind the time frame of one a month per new post.

Well, I'll pick up where I left off....discussing the last major attack into Federally held Missouri during the War of Southern Independence -"Price's Raid" to liberate Missouri from the invading host.

In the previous post, you will see the major engagements of the actions taken. Just click on that hyperlink to learn a little more of these mostly forgotten battles. I'd like to delve a little more specifically on the Battle of Westport, which occurred on 23 OCT 1864. 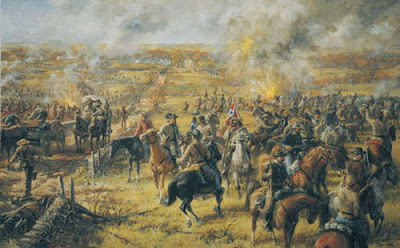 Gen. Joe Shelby and His Men at Westport


The above print is by the outstanding artist, Andy Thomas. He has a lot of great artwork depicting the Trans-Mississippi Theater. I really appreciate his efforts to tell more of the story of the fighting men on both sides of the conflict in these battles so many years ago.

Westport, which is on the south side of the modern day Kansas City, MO was really the last gasp of MG Price's Army of Missouri on that fateful expedition. Some call this the Gettysburg of the West (I'm not sure why...maybe in a small sense it is similar, but those comparisons don't speak of the larger mission objectives I believe). But to be sure it is one of the largest battles fought in Missouri with over 30,000 men engaged. Someone made a very comprehensive description (at least from the point of view that a blog should take!) of the Battle on Wikipedia.

The 8th MO CAV REG was engaged at Byram's Ford. Often in the War of Southern Independence, fords were important terrain features which were access points to key terrain...areas that are critical to hold or use to allow the battle to be successful. The Federal units had more manpower and maneuvered them successfully, in a series of frontal- and then - flanking attacks. I think had BG Shelby and his Iron Brigade been sufficiently supplied, the day might have gone differently. But regardless, this was basically the same story through the entire war. The Confederacy often was poorly supplied and armed, which then led to them not accomplishing their expedition mission aims.

There are some nice pictures of this well preserved battlefield in Kansas City, MO from the Civil War Album. I'd like to visit the site someday and see in person BG Jo O. Shelby and many of his hard fighting Iron Brigade (CAV) burial sites and memorials. 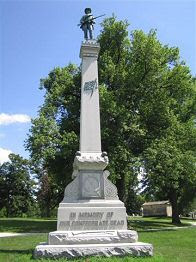 Warfare is a fascinating subject. Despite the dubious morality of using violence to achieve personal or political aims. It remains that conflict has been used to do just that throughout recorded history.

Your article is very well done, a good read.