This a great article found by my brother Nathaniel on Nathan Bedford Forrest and how his name is regularly marred. It is isn't right, and I find it my duty to set history straight. Besides, this is a site about Confederate Cavalry, right?! So enjoy! 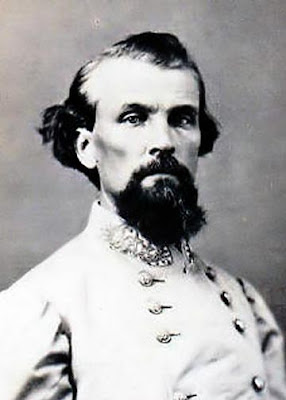 Recently with the situation and discussions at MTSU (Middle Tennessee State University) about the demands of an "insulted" student to change the name of the Forrest ROTC building several Letters to the Editor and op-eds in the DNJ have discussed Forrest in terms of the folk legend that has come to be accepted as history. Even people writing in support of Forrest have made the same fundamental errors.

What is presented as "history" is instead what is necessary for scholars to be published. Just as it is easy to be published praising Lincoln and virtually impossible to be published criticizing Lincoln it has come to pass that getting published repeating old lies about Forrest is a lot easier than publishing the truth.

In 1871 at the height of Radical Reconstruction William Tecumseh Sherman chaired a Radical Republican Congressional investigation into the KKK and its activities. Among the former Confederate officers investigated and interviewed was N.B. Forrest since his name was used in forming and recruiting the original Klan.

Sherman was never a friend or ally of Forrest, referring to him as "That Devil Forrest," and was noted to have stated before the investigation convened that, "We are here to investigate Forrest, charge Forrest, try Forrest, convict Forrest and hang Forrest."

The congressional committee completed its investigation — which included revisiting the alleged "Ft. Pillow Massacre" — and concluded that while Forrest's name had been used in forming the Klan that it was likely done without his permission and that his only activities related to the Klan were his persistent and public efforts to compel it to disband. They concluded he was not the founder or first leader of the KKK.

The congressional investigation also found that there was no evidence of a "massacre" at Ft. Pillow (see http://37thtexas.org/html/grandfab.html) with "isolated incidents along the riverbank" which Forrest stopped as soon as he arrived on-scene. The Federal Official Records document that a Union lieutenant, not Forrest's men, set fire to Union barracks with wounded Union soldiers inside. Forrest transferred the 14 most severely wounded United States Colored Troops to the U.S. Steamer Silver Cloud — hardly the act of someone having committed a "massacre."

While Forrest was a slave dealer prior to the war he was known for humane policies. When the war started he then owned 45 black men and had to consider their fates.

"Forty-five of Forrest's own slaves, indeed served through the war with him as teamsters. 'I said to forty-five colored fellows on my plantation...' Forrest told a Congressional committee after the war, 'that I was going into the army; and that if they would go with me, if we got whipped they would be free anyhow, and that if we succeeded and slavery was perpetuated, if they would act faithfully with me to the end of the war, I would set them free. Eighteen months before the war closed I was satisfied that we were going to be defeated, and I gave those forty-five men, or forty-four of them, their free papers, for fear I might get killed.'" — "'First With the Most' Forrest" by Robert Selph Henry, Indianapolis, Ind.: Bobbs-Merrill, 1944, page 14.

How did these men serve in Forrest's comand? The most reliable military resource concerning the Civil War documents their real roles.

"The forces attacking my camp were the First Regiment Texas Rangers [8th Texas Cavalry, Terry's Texas Rangers, ed.], Colonel Wharton, and a battalion of the First Georgia Rangers, Colonel Morrison, and a large number of citizens of Rutherford County, many of whom had recently taken the oath of allegiance to the United States Government. There were also quite a number of negroes attached to the Texas and Georgia troops, who were armed and equipped, and took part in the several engagements with my forces during the day." — Federal Official Records, Series I, Vol XVI Part I, pg. 805, Lt. Col. Parkhurst's Report (Ninth Michigan Infantry) on Col. Forrest's attack at Murfreesboro, Tenn, July 13, 1862.

On July 4, 1875, Forrest gave the following speech when he was invited to speak by the Jubilee of Pole Bearers, a political and social organization in the post-war era comprised of black Southerners:

Miss Lou Lewis was introduced to General Forrest then presented him with a bouquet of flowers and said: 'Mr. Forrest — allow me to present you this bouquet as a token of reconciliation, an offering of peace and good will.'

Gen. Forrest received the flowers with a bow, and replied:

'Miss Lewis, ladies and gentlemen — I accept these flowers as a token of reconciliation between the white and colored races of the South. I accept them more particularly, since they come from a colored lady, for if there is any one on God's great earth who loves the ladies, it is myself.

'This is a proud day for me. Having occupied the position I have for thirteen years, and being misunderstood by the colored race, I take this occasion to say that I am your friend. I am here as the representative of the Southern people — one that has been more maligned than any other.

'I assure you that every man who was in the Confederate army is your friend. We were born on the same soil, breathe the same air, live in the same land, and why should we not be brothers and sisters.

'When the war broke out I believed it to be my duty to fight for my country, and I did so. I came here with the jeers and sneers of a few white people, who did not think it right. I think it is right, and will do all I can to bring about harmony, peace and unity. I want to elevate every man, and to see you take your places in your shops, stores and offices.

'I don't propose to say anything about politics, but I want you to do as I do — go to the polls and select the best men to vote for. I feel that you are free men, I am a free man, and we can do as we please. I came here as a friend and whenever I can serve any of you I will do so.

'We have one Union, one flag, one country; therefore, let us stand together. Although we differ in color, we should not differ in sentiment.

'Many things have been said in regard to myself, and many reports circulated, which may perhaps be believed by some of you, but there are many around me who can contradict them. I have been many times in the heat of battle — oftener, perhaps, than any within the sound of my voice. Men have come to me to ask for quarter, both black and white, and I have shielded them.

'Do your duty as citizens, and if any are oppressed, I will be your friend. I thank you for the flowers, and assure you that I am with you in heart and hand.'"

It is clear when one considers the factual records of the period without three or four layers of academic interpretation that much of what is considered "accepted fact" about Forrest is instead "accepted fallacy."

Michael Kelley, of Pascagoula, Miss., is a member of the 37th Texas Cavalry Confederate re-enactment group. More information can be found about it at 37thtexas.org.

I googled "Founder of the KKK", and the 2nd listed was Wikipedia. This is what they had to say about Nathan Bedford Forrest.

After the war he was alleged to have participated in the founding of the Ku Klux Klan.

Despite rumors that he was the first Grand Wizard of the Klan, the Congressional investigation of the Klan in 1871, which included several former Confederate generals, undertaken by Radical Republicans concluded that Forrest did not found the Klan, was not its leader, did not participate in its activities and worked to have it disbanded.[1]

Yeah, actually, that's where I found the article Brent posted, hehe. It's the article footnoted in that section you quoted.

I was also looking at Amazon.com and only found one book on Forrest that discussed the investigations of the KKK origins and the alleged Fort Pillow massacre which are both wrongfully attributed to Forrest. The rest of the books seems to perpetuate the libelous stories.

I like Wikipedia...I have it linked in various places on this blogsite.

Of course, there is a ton of libelous 'accounts' in abundance...the history is controlled by liberal Yankee descendants. I do believe the applicable term for them is 'Damn Yankee'

Great job uncovering the truth Nathaniel, and Brent you have displayed that information in a format that enables southern historians and true gentlemen like Nathan Bedford Forrest to finally get some vindication of their maligned character. Also Wikipedia should be praised for having the courage to print the truth after all of these years and to fly in the face of the Yankee lies.