Here is another post regarding MG Price's last effort to secure Missouri not just in the hearts of its citizens, but also militarily, for the Confederacy. Since I've discussed both Fort Davidson (Pilot Knob) and now the Battle of Westport, I think I'd like to share a few more words from LT John A Bennett of Co. D.

I often think of this time of year, and what the 8th MO CAV REG might have been doing on this day, so many years ago. From Bennett's diary from Campaigning With Marmaduke by James McGhee, we can gain a glimpse of the thoughts and hardships of the day. Without further adieu, here are some of his entries during that last great campaign of the fighting men of the Confederacy from Missouri, Arkansas and Texas - to free their home state and protect their neighboring states - from the tyranny of an invading and rest their homelands to liberty and peace - indeed their goal was a 'glorious victory' to this end.

31 OCT - "...The road runs part of the time in Arkansas and part in Cherokee Nation. Country passed over today nearly deserted. The houses are mostly burned and farms destroyed. The whole of the country traveled over from Jackson County, MO., to this point is deserted or nearly so. Towns burned, houses burned, and everything going to decay. The heart of the philanthropist can not help bleeding as he sees the destruction along this line of march and the misery it has caused thousands who once lived here in affluence and ease, but are now wanderers in exile from their once happy homes. God of mercy, stop this unholy war and let peace once more reign in the unfortunate country, is my prayer." 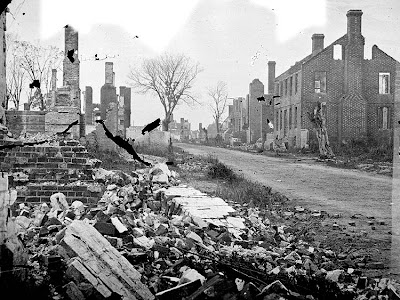 3 NOV - "Snow last night; quite gloomy this morning. Some snow throughout the day."

5 NOV - "Marched southeast; beautiful day. Camped in Cherokee Nation; very hungry at the time of writing this and no prospect of anything to eat. We have had no breadstuffs issued to us for two weeks past, living on broiled beef."

10 NOV - "My horse gave out yesterday about 12 o'clock, so I left him and had to foot it...we could travel much faster afoot than the command, as they had to stop and graze their animals to try to get them through, but hundreds are giving out every day and are left on the prairie. We have had no corn or forage of any sort to feed our animals for several hundred miles. The men have had no bread issued to them for 18 days and a hundred miles to march yet before we can get forage for horses or bread for men. The army is living on beef without salt..."

13 NOV - Morning beautiful and serene. Nothing to eat last night or this morning; very weak and loath to move on, but we are here in the wilderness and no one living nearer than 50 miles; all the settlements evacuated, therefore we are compelled to travel or starve. Six wagons met us this evening from Boggy Depot with rations of salt and flour. The ration was very short - only half a pint of flour to the man and about a thimble full of salt."

20 NOV - Cool, ground frozen; crossed a small stream early, below a mill; pulled of my boots and waded across; the cold water and rocks made my feet very cold...."

25 DEC - "Marched up the Red River 10 miles and camped at the winter quarters used by Gen. Gano's command last winter. This Christmas makes four that I have spent in the Confederate service. The Christmas of '61 I spent in camp near New Madrid; the Christmas of '62 I was on the Van Buren scout and made my dinner on a cold piece of cornbread; the Christmas of '63 I spent in Camp Ewing, Ark.; my dinner that day was something better than before - I had chicken, flour bread cooked on a board and beef roasted over the fire. What another year may bring forth is hard to tell. Where I am another Christmas, and what I may have for dinner, is too far in the future and the times too fluctuating to say what and where. I hope peace may be made before another year rolls around. That the soldiers of the Confederacy may return to their families and friends and enjoy once more the sweets of social society is my prayer."

31 DEC - "...Today closes the year 1864, and still the great war, commenced in 1861 is raging in all its savage fury. In 1860 we had peace at home and peace abroad. All things seemed to be in a prosperous condition....All things calculated to make man prosperous and happy were approximately to perfection. But lo, the contrast today! The despoiler came and in his ambition has brought ruin and desolation on our once happy country....We were once happy and resting quietly beneath our own vines and fig trees in peace; but now we are engaged in one of the most frightful wars recorded in the annals of time. Oh, that some person could come forth and set out a plan that an honorable peace could be ratified between the contending parties. Such a person's name would be honored to the latest generation. But we must look higher than man to see this war closed. We must look to Him who can calm the billows of the tempest-tossed ocean to bring peace and quiet to our country. When He has chastened the country for its neglect of duty, and not till then, will we have peace." 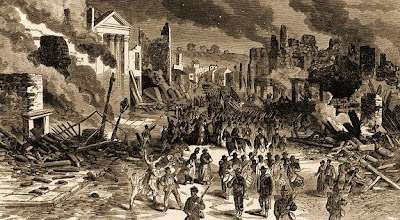 I don't think I can add much to his words that described his feelings and events of the day. The reality of war and the often deprivations of that of a soldier...even a cavalry soldier. God Bless all those that have, do and will sacrifice for freedom, peace and prosperity - especially that among this choice Nation of United States!! 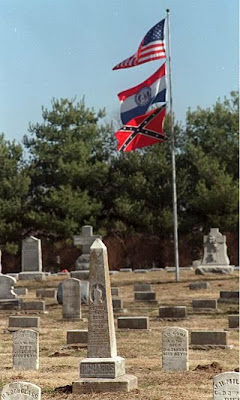 I was wandering a cemetery today on my lunch hour and noticed a headstone that says it was of a soldier in the 8th Missouri Cavalry, Company E. His name was abbreviated "Jos. R. Camp" and that was all the headstone said besides the unit information I already mentioned. He is not listed on the roster, as far as I can see. Do you want me to send you the picture of the headstone?

Yea, that'd be great to have a pic of the headstone. Where is the cemetery? I'm pretty confident Jim McGhee has an exhaustive list of the gravesites of the 8th MO CSA. I did a search of the Civil War Soldiers and Sailors site. Campbell came up a lot as a Union name. Also saw it as State Militia. There were 8th MO Cavalry units on both sides. 3 to be exact. 8th MO US, 8th MO State Militia US (I had another grandfather, CPT Jacob Cossairt, Co. I in this unit) and 8th MO CSA. He doesn't appear to be in the 8th MO CSA, but well could be from one of the other 2. Could you send me more info on the cemetery? Thanks much for your post. email is csaharty@gmail.com

Getting to know the historic times with the images of sadness within this post. Thanks for sharing this post.

properties for sale in coimbatore | flats for sale