August 10th was Lt. Joseph Guild Lewis's 171st birthday (if he were still alive!!). Four years ago, we had our 4th child, a son, and when it looked like his birthday was going to fall on the same day, we decided to name him after my 3rd great grandpap...none other than Joseph Guild Lewis! 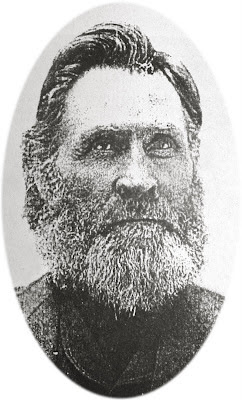 So today, on August 12th, we celebrated Joseph Guild Harty's 4th birthday. We have told him for some time where he got his name. And he is learning some things about Grandpap. At our last reenactment event, he came off the sidelines of the battle, and said to my wife, "I'd rather die than talk to a Yankee!"

While we thought it was very humorous, and pleased that he is taking pride in honoring the Confederate side, we were of course a bit perplexed as to where he got such an idea. We figured it was just the little boy in him, but we also realized that we need to do a bit better in delivering Grandpap's Promise to Little Joe. 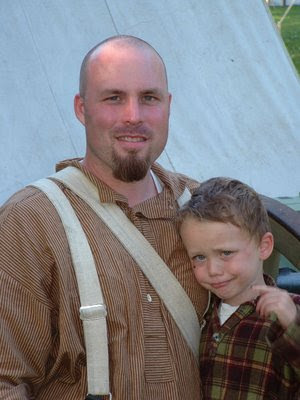 So Grandpap, in honor of your birthday, I promise to continue to explain to your grandsons the lessons that you learned about the War Between the States. How happy I am to know that such great Americans, on both sides, went forth to preserve the freedom and liberty of this country! I promise to make sure that my sons understand that neither side was completely right or wrong, but that both fought valiantly to make America what it is today.
Posted by CSA Brent at 11:54 PM

We read your comments on Little Joe's birthday and his feelings after walking off the reenactment field. We laughed and your mom stated that we just thought that Nathaniel was the last Confederate as he made his thoughts known when he was a little boy too. It was good of you all to talk to him, etc., but in a few years he will be concerned about girls and will never remember his comment. I bet Joseph Guild Lewis probably laughed out loud with the thought of such a small grandson saying what his namesake said, but I bet he was happy with good parents who guided his 4th great grandson too! Great job all around! I liked Nathaniel's comments too!

Yea, we're trying hard. I was so concerned that I was possibly sending the wrong message (after all, even the Yanks - for the most part - are pretty good folks to be around!) that I went out and bought some sky blue pants to begin to use in my impression. I intend to have Federal stuff to do Jacob Cossairt, and galvanizing is important in the cavalry, even dismounted cavalry.

At any rate, it is surely a good laugh, and likely nothing to worry about. He's just a little guy after all!

Little Joe will be fine. He has good parents. He'll be raised just fine.
Keep praying and teaching good things to him and he will be just fine.

Hello Brent! Not sure if you check this blog anymore. I wanted to get in touch because Joseph Guild Lewis is also my 3rd great grandfather. My line is Joseph Guild Lewis + Nicey English - GL Lewis + Mary Elena Brewer - Guile Milton Lewis + Isabel Proffer - Archie Jackson + Norma Lewis. Your photo looks remarkably like my first cousins, so I would like to connect and see more about your line! Please get in touch if you would like to: chrissy.wolfersberger@gmail.com. Cheers!